Formed in 1924 the group is based in North Tonbridge and consists of two beaver colonies which meet on a Tuesday and Friday, two cub packs which meet on Monday and Wednesday and a scout troop which meets on Friday. The 2nd Tonbridge is also associated with the Ridgeway Explorer Unit.

Over Ninety years of dedicated service in the parishThe 2nd Tonbridge Scout Group was founded in 1924 by the Rev. Fred Cribb, a curate at Tonbridge Parish Church. In the years since, the Group has helped many hundreds of boys and girls to “Be Prepared”.

The scarf is claret and gold, and has a Bishop’s Cross badge which recognizes that the Group is part of Tonbridge Parish Church and in memory of the Group Chairman from 1946, Russell White, who became the first Bishop of Tonbridge in 1959.

At first, the Group met in The Parish Room (now Hermitage Court) in East Street and occasionally in St. Saviour’s Hall (later used by the Red Cross) in Elm Lane just off Shipbourne Road. The Group had a band and led parades regularly. In 1928 the Group acquired a World War 1 Army hut for £100 and erected it on a site in Cannon Lane where Darby’s is today, opposite B&Q. The area was undeveloped countryside and the hut was reached by a narrow rural lane. After World War 2 the hut was moved to a site in The Ridgeway. 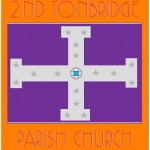 In the sixties the Group decided to raise money to replace the old hut with a modern brick built headquarters. At the end of the sixties the Group had the opportunity to use an empty shop at the north end of the High Street for a few weeks for an “ongoing Jumble Sale”. The shop was one of several shops due for demolition to allow the road to be widened at the junction with Bordyke. However, it was discovered that the shop was hiding a valuable medieval structure within its construction and the authorities decided that the shop could not be demolished. Nevertheless, the road was widened but it took more than ten years for a decision about the shop’s future. It is no longer a shop but offices known as Blair House. What had started as a short term fund raising event turned into a long running, well managed business open two days a week with an enviable reputation for bargains of all sorts. It was one of the first “Charity Shops”! The proceeds from this endeavour resulted in the construction of the fine Headquarters building you see today in The Ridgeway. 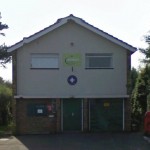 For those of you who have never been inside the building, it comprises meeting rooms upstairs, a kitchen, toilets, a hall large enough for a badminton court, a garage, a large store for equipment, a car park and a small paddock at the rear. The Group also owns a small plot of land across the road where it stores various items. Since renovation, the Headquarters is used not only by the Scout Group but also by other local community groups. At its height in the nineteen eighties the Scout Group had nearly 200 boys and girls from age 6 to 21 years. Now, in the 21st Century, changes in social attitudes and expectations has led to a decline in membership in some parts of the UK including Kent, but Scouting still has some 25 million members in 200 countries a well as a healthy attendance across all sections at the 2nd. The Scouting Movement in the UK has adapted its structure and programmed to meet the challenge of these changes.

Scouting continues to provide an enjoyable, attractive and worthwhile scheme of training, which aims to help young people in their personal development and become responsible citizens. Today the Group’s team of dedicated Leaders, Helpers and Supporters continue to provide Scouting for a Beaver Colony (6 – 8 yrs), two Cub Packs (8 – 10.5 yrs), a Scout Troop (10.5 14 yrs) and an Explorer Unit (14 to 18 yrs).

If you would like to be part of this success story as a Leader, Helper or Supporter please contact Group Scout Leader Jon Launder Tel 01732 301073, Chairman Peter Burgess Tel. 01732 350651 for more information or complete the joining form.